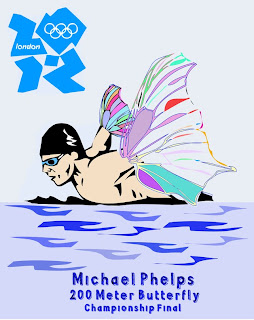 Over the weekend, I photographed a swim competition where 2 olympic swimmers competed. And so, the entire weekend the swimmers were on my mind and so was the upcoming London 2012 olympics, because the 2012 olympics is supposed to be Michael Phelps' last olympics. In class today, we were to create an illustration that combined human trait with an animal trait, and so I created Michael Phelps (the worlds fastest swimmer) with butterfly wings, for the event that he competes in, the 200 butterfly.
Posted by Sagette at 5:37 PM