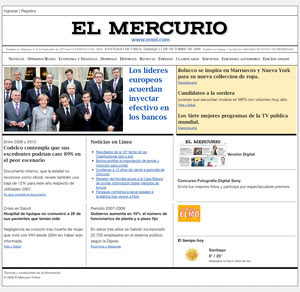 El Mercurio is a conservative Chilean newspaper with editions in Valparaíso and Santiago. It was founded in 1827. It is one of the oldest circulated newspapers in the Spanish language, circulating about 1 million copies a week.

The web version of El Mercurio has 3 parts. The online version of the newspaper (www.elmercuio.cl), the digital version (www.emol.com) which provides news and other local advertisements, and a interactive version of the print newspaper.

The online version of El Mercurio needed some help. It lacked texture and feel of the print version. Specifically, it lacked a grid layout that is critical in newspaper design. In keeping its conservative appeal, a re-interpretation was made of the high circulated newspaper.

This re-interpretation was inspired by looking at other online newspaper sites such as The New York Times Online, The Guardian UK, and CNN.com.