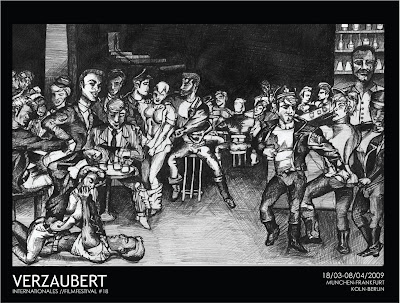 This project was based on the study of human relationship narratives. I wanted to study body gesture, situation, and composition. I created a very graphic black and white poster for a Berlin film festival, using a bic pen. For inspiration, I used Jean Genet's literary work-" Ignoring traditional plot and psychology, Genet's work relies heavy on ritual, transformation, illusion, and interchangeable identities. The homosexuals, prostitutes, thieves and outcasts are stuck in self-destructive circles. They express the despair and loniless of a man caught in a maze of mirrors, trapped by endless progression of images of his own." I wanted the bar scene to capture the underground 1950's Berlin feel. Click on the image to see the pen detail.
Posted by C. Llerena Aguirre at 7:45 AM